Alberto Orte Espejo was born in Madrid and now lives in El Puerto de Santa María (Cádiz) with his family. In 1999, at the age of 24, he partnered with his friend Patrick Mata, a native of Malaga, and created Ole Imports. Alberto handles the selection of wines and winemaking in Spain while Patrick manages the commercial and marketing part of the business in the USA.

In 2003, Patrick and Alberto decided to establish another company that was directly involved in the production of wine in different areas of Spain, so they created the Vinos Atlántico, whose fundamental mission is to find great vineyard-sites and indigenous varietals from old vines in high elevation vineyards tended in low yielding, balanced soil which will be used as the raw material to handcraft their wines.

Alberto Orte Vinos is a division of Vinos Atlántico that highlights wines farmed and vinified by Alberto from beginning to end, thus warranting his talent and status as one of the great active vintners in Spain. 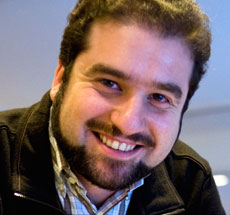